The Second Sunday of Lent: St. Gregory Palamas and the Healing of the Paralytic

St. Gregory was born in Constantinople in the year 1296. He was born to an aristocratic family. His father was in service to Emperor Andronicus II Paleologos. His father died while Gregory was relatively young, and is then raised by the Emperor. His intelligence and abilities were recognized, and he received the finest education available to him. Though the Emperor hoped Gregory would serve his government, the young man desired to serve Christ instead. His monastic life began when he was about 20 years old on Mt. Athos at the monastery of Vatopedi.

His monastic disciplines grew at various monasteries under a variety of teachers, as did his spirit in Christ. Then, in 1326, he and other brothers escaped Turkish invasion and fled to Thessalonica where he was ordained a priest. After some time, he gathered together a small community near the city. In 1331 he returned to Mt Athos and began to write theological works (he was in his mid-thirties). During this decade all changed for Gregory.

Enter Barlaam of Calabria, Italy. Also a monk, he declared that it is impossible to know the essence of God. True enough, but he took things to an extreme. He argued against many monastic practices of the day, but his theological argument were directed against the experience of God. Subject upon which the dispute had its arguments focused on the Transformation of Christ on Mt. Tabor. Was the light which emanated from Christ truly a manifestation of his divinity, or a created intermediary? Barlaam’s error is this: he proposes a created intermediary, and thus reeks of Arianism.

Gregory’s counter of Barlaam was this: though humans cannot know of God’s essence, we can know God by experiencing his energies. For example, humans cannot touch the sun, but we directly experience its energy. We know and experience the sun’s light, warmth, and energy. The 1341 Council of Constantinople accepted Gregory’s teachings:

…God, unapproachable in his Essence, reveals himself through his energies, which are directed towards the world and are able to be perceived, like the light of Tabor, but are neither material or created. 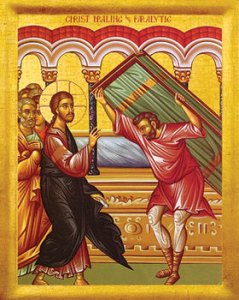 The second Sunday of Lent also presents to the Church the account of the Healing of the Paralytic as found in Mark 2: 1 – 12. The faith of those carrying the Paralytic is noted. They bear him to Christ who is speaking in a home. There were too many people and no room for them. They are aggressive and persistent. They tear through the roof (what an insurance claim!) and lower their friend before Christ, and he says, “Child, your sins are forgiven” (Mark 2: 5). Our Lord’s words bring about controversy:

Why does this man speak like this? It is blasphemy! Who can forgive sins but God alone? And immediately Jesus, perceiving in his spirit that they questioned like this within themselves, said to them, “Why do you question like this in hour hearts? Which is easier, to say to the paralytic, “Your sins are forgiven,’ or to say, ‘Rise, take up your may and walk?’ But that you may know that the Son of man has authority on earth to forgive sins’ — he said to the paralytic — “I say to you, arise take up your pallet and go to your house.” And he rose, and immediately took up the pallet and went out before them all; so that they were all amazed and glorified God, saying, “We never saw anything like this!” (Mark 2: 7 -12).

St. Gregory, though educated and privileged, knew that he, too, was a paralytic — a spiritual paralytic. He fled to the presence of Christ for healing. He too, was forgiven of his sins, was healed, made whole and began to walk IN CHRIST. 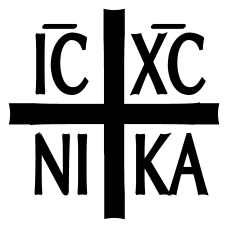 But, as the monastic life is not to be dismissed, neither is the parochial life to be dismissed! Each time we enter the local church we come into the forgiving and healing presence of Christ. In our own parish we encounter the Triune God. In our presence the energies of God are touching us! We hear the Scriptures. We sing and hear the hymns, say the prayers — even making the physical prayer of the Sign of the Cross.  Here, we engage in the sacramental life of the Church: baptism, and unction, confession, and the Eucharist; marriage, and holy orders all take place for our healing and salvation in our local parish. We encounter the Triune God and God’s energies to work in us that we may bear this salvation into our home, marriages, family lives, to work, to the market, to school to the commute where we further work out our salvation. We are given the place, the setting, and the grace of God to be forgiven each day, and to be healed and walk anew in Christ — to his glory!