The Second Sunday of Lent: St. Gregory Palamas and the Healing of the Paralytic 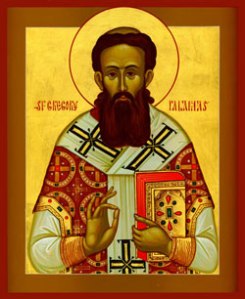 St. Gregory was born in Constantinople in the year 1296. He was born to an aristocratic family. His father was in service to Emperor Andronicus II Paleologos. His father died while Gregory was relatively young, and is then raised by the Emperor. His intelligence and abilities were recognized, and he received the finest education available to him. Though the Emperor hoped Gregory would serve his government, the young man desired to serve Christ instead. His monastic life began when he was about 20 years old on Mt. Athos at the monastery of Vatopedi.

His monastic disciplines grew at various monasteries under a variety of teachers, as did his spirit in Christ. Then, in 1326, he and other brothers escaped Turkish invasion and fled to Thessalonica where he was ordained a priest. After some time, he gathered together a small community near the city. In 1331 he returned to Mt Athos and began to write theological works (he was in his mid-thirties). During this decade all changed for Gregory.