← A New Creation, Recapitulation, and Lazarus
“The Only Living Boy in New York” — Here I Am → 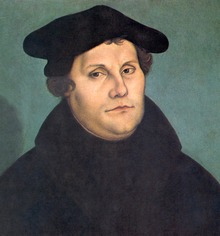 October 31, 2017 marks the 500th anniversary of the Protestant Reformation initiated by Martin Luther’s posting of his 95 theses against the contemporary expression of the Roman Catholic Church. Granted, many of his objections were justified, but Luther could not maintain control of the forces of the Reformation. Because of other radical personalities of the day, the consequences of his actions — ultimately — led not to a reformation, but a deformation of the Christian faith.

The resulting theological assumptions of the Reformation include, among others, Sola Fide (meaning justification/salvation by faith alone). In this posting I will only discuss “by faith alone.”

Martin Luther was a priest, professor, and was a monk in an Augustinian monastery in Wittenberg, Germany. To his credit he was a devout man, and he held tenaciously to the truth that Christ’s Body and Blood are given by our Lord to the faithful in the Eucharist. Additionally, he maintained a true devotion to Mary as the Mother of God. Yet, he was a psychologically complex man. He was excessively, if not obsessively, scrupulous. This brought him, it appears, to a selective reading and interpretation of the Scriptures — especially St. Paul’s letters to the Romans and the Galatians. His psychology, it appears, led him to read and interpret St. Paul to teach that we are justified/saved by faith, not by works. His psychology, it appears, led him to ignore a specific prepositional phrase: three words that followed in St. Paul’s teaching— one “is not justified by works of the Law.” The law St. Paul refers to is the Mosaic Law. For example, we read this from St. Paul’s letter to the Galatians:

Not only did Dr. Luther misread St. Paul in this matter, but he also chose to reject St. James’ epistle. Dr. Luther called it an “epistle of straw.” Let’s examine why he excised James from the canon of the New Testament. We read from the epistle’s second chapter:

What does it profit, my brethren, if a man says he has faith but has not works? Can his faith save him? If a brother or sister is poorly clothed and in lack of daily food, and one of you says to them, “Go in peace, be warmed and filled,” without giving them the things needed for the body, what does it profit? So faith by itself, if it has no works, is dead. But some one will say, “You have faith and I have works.” Show me your faith apart from your works, and I by my works will show you my faith…You see that a man is justified by works and not by faith alone. And in the same way was not Rahab the harlot justified by works when she received the messengers and sent them out another way? For as the body apart from the spirit is dead, so faith apart from works is dead (James 2: 14 – 18, 24 – 26).

The passage from James is the only place in the New Testament that places the word faith together with the word alone — and it defeats the Protestant teaching of salvation/justification by faith alone.

Perhaps the reformers also chose to ignore a couple of other verses written by St. Paul:

So then, my beloved, just as you always obeyed, not only in my presence alone, but even more in my absence, with fear and trembling work out you own salvation. For God is the one working in [energon] you to will and to work [energein] in behalf of his good pleasure (Phil 2: 12 – 13).

There is the need to note that the works which effect our salvation are not simply the works of human activity. Rather, the Greek word energein, to work, implies, by the prefix ev-, a divine in-working that completes human effort to bring about both God’s will and our salvation. We also have St. Paul’s words in his epistle to the Ephesians (which initially seem to support our Protestant brothers’ and sisters’ position):

For by grace you have been saved through faith, and this is not of your own doing, it is the gift of God, not because of works, lest any man should boast. For we are his workmanship created in Christ Jesus for good works, which God prepared beforehand, that we should walk in them (Eph 2: 8 – 9).

St. Paul, here, teaches that we do not merit salvation by anything we do, but our salvation is given to us that we may do God’s intended works “to the greater glory of God.” Hence, works of faith must be part of our salvation in Christ.

Even more importantly, we need to examine Jesus’ own words on the matter of doing and working: “Therefore, Jesus said to those Jews who had believed in him, ‘If you abide in my word, truly you are my disciples’” (John 8: 31). Abiding in Jesus’s word means far more than just an intellectual belief. Our Lord makes things a little clearer: “‘If you should keep my commandments, you abide in my love, just as I have kept the commandments of my Father and abide in his love’” (John 15: 10).
St. Paul concludes the day’s assigned reading from Galatians:

I have been crucified together with Christ; it is no longer I who live, but Christ who lives in me; and the life I now live in the flesh I live by faith in the Son of God, who loved me and gave himself for me” (Gal 2: 20).

With this verse, we must look to the lives of the saints, for they always prove the Christian faith before a faithless and graceless world. For they lived in Christ and Christ dwelt in them. Christ was manifested by the works of their faith.

This posting parallels a sermon given on October 29. This date in the Orthodox Church commemorates the lives of several saints. Among them is St. Abramius the Archimandrite of Rostov. We learn of his faith and works of faith:

Saint Abramius, Archimandrite of Rostov, in the world Abercius, left his parents’ home in his youth and entered upon the path of Christian asceticism. Having assumed the monastic schema, Abramius settled at Rostov on the shore of Lake Nero. In the Rostov lands there were not many pagans, and the saint worked intensely at spreading the true Faith.
Not far from the cell of the saint was a pagan temple, where the pagans worshipped a stone idol of Veles (Volos), which caused fright among the inhabitants of Rostov. In a miraculous vision the Apostle John the Theologian stood before Abramius, and gave him a staff with a cross on top, with which the venerable one destroyed the idol. At the place of the pagan temple, Saint Abramius founded a monastery in honor of the Theophany and became its head.
In memory of the miraculous appearance, the holy monk built a church named for Saint John the Theologian. Many of the pagans were persuaded and baptized by Saint Abramius. Particularly great was his influence with the children whom he taught the ability to read and write, instructing them in the law of God, and tonsured monastics from among them.
Everyone who came to the monastery was accepted with love. The saint’s life was a constant work of prayer and toil for the benefit of the brethren: he chopped firewood for the oven, he laundered the monks’ clothing and carried water for the kitchen. Saint Abramius reposed in old age and was buried in the church of the Theophany.