← The Raising of the Son of the Widow of Nain: Life Intersects Death
Chistus Victor – A Primer (Part Three) →

The Dogs of Keswick

Keswick, England is a beautiful town in northwestern England — in the Lakes District. My wife and I (together with my cousin and his wife) arrived via a bus ride into the heart of its market district. We stepped into dog central where the canine population that day nearly equalled the human population. I love dogs and a smile spread across my face. We spent three too short days in this lovely town, and a great deal of my time was spent watching the dogs and their interactions with their humans. I’m no longer a girl watcher — long gone are those days — only gets one into trouble. People watching? Equally problematic. But dog watching? That’s where it’s at, and it’s a wonderful way to get to know the people who love their dogs.
This is clearly a self-indulgent posting (but isn’t that what blogging is all about?).  I hope you enjoy the photos taken of the dogs of Keswick!

I’ll start with my favorite, Connie, a small hearing dog who serves an elderly man who is almost completely deaf.  Connie was with her human at The Theater at the Lake (the lake being the Derwent Water which is home to St. Herbert’s Island).  The two of them had just completed watching a play called “Julia.”  Connie was a bit put off by my attention, but she suffered well this fool.  Actually, she is well known by the staff, and those who regularly attend this theater in Keswick.  It was important to note that everyone wanted me to get the best photo possible of her.  I did my best given the increasing number of people filling the area around us.

Now here’s a big boy!  This is Benji, and he is a hybrid wolf, and I can’t recall what canine breed went into the mix.  He is 120 pound and still growing.  Benji was very mellow, and enjoyed the attention (I’m sure he attracts quite a bit of it!).  He also enjoyed my pats on the head and scratching behind his ears.  It’ll be interesting to see how big he is when fulling grown.  According to his humans he eats as much as did their teenaged sons!  At least with Benji his humans won’t have to help with college costs.

Dora is a wire-haired Dachshund.  I was surprised at her size, since I’m used to seeing smaller, short-haired Dachshunds.  Dora was accompanied by her canine sister (she didn’t have time to pose for me), and two human sisters.  Dora and her sister go on walks with their humans quite often, and the four of them travel together frequently (sister number one calls her “Dora the Explora”).  The two Dachshunds also hunt, and I was informed that Dora and her sister have been known to enjoy a mouse every now and then.  Dora’s humans plan to travel to the Seattle area next year, perhaps I should invite her for a good hunt in my fields! 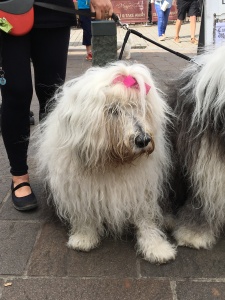 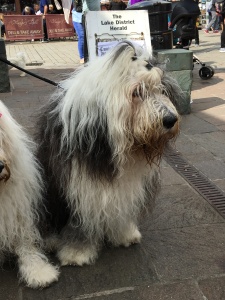 Next are Dylan and Florence.  Obviously, they are Old English Sheep dogs.  They are both seven years old, and have absolutely no sheep to tend.  I think modeling is now their career (note the stylish ribbons sported by the pair).

To the right is Bob, son of Zak.  Zak, I was informed by Bob’s human, is the patriarch (or is it patribark?) of many, many Border Collies in the Lakes District, especially around the Keswick area.  According to Bob’s human, they actually have “family reunions” on occasion, and Bob’s human pointed to two other collies he spotted on St. John’s Street that were part of the family, though I don’t recall their names.  As you see, Zak is immortalized by his own wooden statue that sits outside an antique store.  Well, I suppose we should all toast Zak and his offspring with a fine English ale! 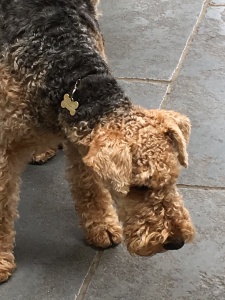 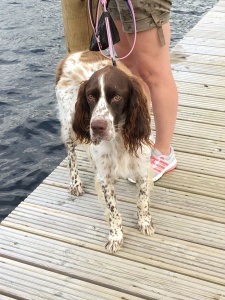 The Derwent Water is a beautiful lake.  There are several stops that you can make as you cruise around the lake on a boat.  Perhaps the most famous stop is the Lingholm estate, made famous by Beatrix Potter and her wonderful children’s stories.  We finished our lunch and I met several more dogs and their families.  Beau was waiting in the restaurant for a morsel to fall from the table.  This photo was taken just after such a treat made its way to him, and he clearly was expecting lightning to strike twice in the same area.  Also, on the dock was Marilyn.  Her humans were playing on paddle boards in Derwent Water, and Marilyn was quite concerned either for their safety, or the fact that she was not allowed in the lake.  What an injustice!

To all our wonderful canine companions!