← The Ever Present Present
The Longest Day of the Year →

The Character of Fiver in Richard Adams’ Watership Down can easily be overlooked.  Fiver can be passed over by the reader and assigned a secondary role behind Hazel and Bigwig, or Thlayli.  However, this is a mistake.  In fact, Fiver’s role as prophet, seer, and mystic propels the rabbits forward on their adventure of discovery and transformation.  His gifts save the rabbits and bring clarity to their encounters and their mission – to create a new type of warren for a new breed of rabbit.
In his home warren he sees he has little chance for a better role and life as an “outskirter.” Fiver’s stature is slight — both physically and in social standing:

“Oh, it’s only Fiver,” said the black-tipped rabbit, “jumping at bluebottles again. Come on, Buckthorn, what were telling me?”
“Fiver?” said the other rabbit. “Why’s he called that?”
“Five in the litter, you know: he was the last — and the smallest. You’d wonder nothing had got him by now. I always say a man couldn’t see him and a fox wouldn’t want him. Still, I admit he seems to be able to keep out of harm’s way.”

Unlike other rabbits, his brother Hazel does not disregard him when Fiver senses a great, mysterious danger. Our small hero soon exerts his gift and comes into his role as we read in the chapter “The Notice Board:” 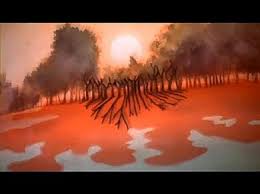 A little way in front of them, the ground had been freshly disturbed. Two piles of earth lay on the grass. Heavy posts, reeking of creosote and paint, towered up as high as the holly trees in the hedge, and the board they carried threw a long shadow across the top of the field…
“Oh, Hazel! This is where it comes from! I know now — something very bad! Some terrible thing — coming closer and closer…I don’t know what it is…But it’s coming. Oh, Hazel, look! The field! It’s covered with blood!”

His vision of terror and death launches Hazel to gather any rabbits who would leave the Sandleford warren on the journey into the unknown dangers of the following night.
Fiver also provides practical advise, and Hazel calls upon it many times. The first instance comes soon as they all approach a river (the Enborne). They were all exhausted and Hazel is unsure of their next step:

Fiver came limping down the path with Pipkin. They, too, checked and stared at the sight of the river.
“What do you think we ought to do now, Fiver?” asked Hazel.
“We shall have to cross it,” he said. “But I don’t think I can swim, Hazel. I’m worn out, and Pipkin’s a good deal worse than I am.”

Fiver’s call to swim struck all the rabbits as odd and abnormal. Adams’ rabbits, like humans, don’t like doing what is unnatural, outside of their “comfort zone.” His call to unnatural action leads them to an ingenious solution — human-like — which propels them to many new behaviors which would never be attempted by any of them. But, it is these new, challenging, and daring actions, in imitation of the rabbit lord El-ahrairah, that form them into rabbits fit for a new type of warren.

The seer’s gifts next come into play to save his comrades when they come upon, and briefly enter into, the company of the Warren of the Snares. Here they encounter a type of rabbit they have never encountered. These rabbits are well-fed, sleek, and secure. They have no enemies, and without enemies they enter into “abstract behaviors.” They create art. They are sophisticated. But all of their cleverness hides a very dark truth. Only Fiver sees it and senses it, and and his distrust and distance causes great frustration for his companions: “I know there’s something unnatural and evil twisted all round this place.” Their frustration leads to near death for Bigwig who has to be freed from a snare — the dark secret of this abnormal warren. Fiver’s insight is ultimately proven true, and he articulates the truth about the Warren of the Snares:

“The warren? You’re going to the warren? You fools! That warren’s nothing but a death hole! The whole place is one foul elil’s [enemies’] larder! It’s snared — everywhere, every day! That explains everything: everything that’s happened since we came here.”
He sat still and his words seemed to come crawling up the sunlight, over the grass.
“Listen, Dandelion. You’re fond of stories, aren’t you? I’ll tell you one — yes, one for El-ahrairah to cry at…One day the farmer thought, ‘I could increase those rabbits: make them part of my farm — their meat, their skins’…He put out food for the rabbits…And then he snared them — not too many: as many as he wanted and not as many as would frighten them all away or destroy the warren…The rabbits became strange in many ways, different from other rabbits. They knew well enough what happening. But even to themselves they pretended that all was well, for the food was good…[they] were squeezed under the terrible weight of the warren’s secret until they gulped out fine folly — about dignity and acquiescence, and anything else that could make believe that the rabbit loved the shining wire.”

Fiver ends his discourse and the recovered Bigwig who doubted Fiver approaches him. “I’m still alive, Fiver,” he said. “So are all of us. You’ve bitten through a bigger peg than this one I’m dragging. Tell us what to do.” With Bigwig’s words Fiver’s worth is noted and remembered by Bigwig and all the others, and his worth is hailed by Hazel-rah as he calls his brother, “Fiver-rah” — for now El-ahrairah’s presence in Fiver is recognized.”

As a mystic, Fiver continues with visions and dreams of meaning and consequence. By them, and courageous action, he rescues Hazel. By them he has confidence and knowledge to assure Hazel of El-ahrairah’s presence among them and of another realm of existence for rabbits:

“Well, there’s another place — another country, isn’t there? We go there when we sleep; at other times, too; and when we die. El-ahrairah comes and goes between the two as he wants, I suppose…It’s a wild place, and very unsafe. And where are we really — there or here?”

The mystic is also practical and leads for Hazel while his injury prevents him from full function as Chief Rabbit. But, he remains the seer and mystic in his ultimate act to protect the newly founded warren. He enters into a frightening trance, and what comes about from his trance leads to their ultimate victory.  For by his trance El-ahrairah himself intervenes in their behalf.

Rest, peace, and strength come to the rabbits as they settle into their cunicular “shining city upon a hill” — Watership Down. They were all transformed from scared bunnies to noble creatures who have walked in the ways of El-ahrairah, and all have the little fifth born rabbit and his strange gift and courage to thank for it.

One last time… “Saint Fiver-rah, pray for us!”
In Christ,
Fr. Irenaeus