← Doxology
Through the Narrow Door →

By the Blood of Christ

In his epistle to the first century Christians in Ephesus, St. Paul informs Gentile converts to Christ of their spiritual condition prior to coming to the faith:

Therefore, remember that at one time you Gentiles in the flesh, called the uncircumcision in the flesh by what is called the circumcision, which is made in the flesh by hands — remember that you were at that time separated from Christ, alienated from the commonwealth of Israel, and strangers to the covenants of the promise, having no hope and without God in the world. But now in Christ Jesus your who once were far off have been brought near by the blood of Christ (Eph 2: 11 – 13, emphasis added).

The Gentile Christians of Ephesus now being in Christ have relationship which was gained by the life giving blood shed by Christ on the Cross.
Then, in another epistle written by St. Paul while imprisoned in Rome, he make this declaration:

He is before all things, and in him all things are held in their proper orders. He is the head of the body, the Church. He is the firstborn from among the dead, that in everything he might be pre-eminent. For in him the fulness was pleased to dwell, and through him to reconcile all things to himself, those things on earth and those things in heaven, making peace by the blood of his Cross (Col 1: 17 – 21).

All people and all things are gathered together in Christ, and in him all things once scattered into alienation are drawn into relational union in him. All and all things can now live in peace — in spite of those aspects of life which would otherwise separate us from one another and cause enmity. 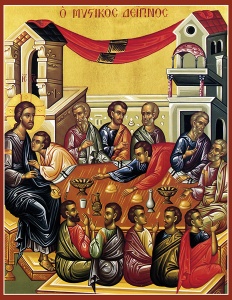 Elsewhere, regarding the shed blood of Christ, St. Matthew records these words of Jesus during the Last Supper: “This is my blood of the Covenant, the [blood] which is being poured [ekchunnomenon] out for many for the forgiveness of sins” (Mt 26: 28). The Greek word in the passage above is a present, passive participle. The present tense, or better aspect, of a Greek verb / participle generally imparts the meaning of ongoing action. In other words the action is without an implied end. Here, Jesus is stating that his blood contained in the chalice in the Upper Room is continually being poured out for the forgiveness of sins, and, by adding in the meaning of St. Paul’s words fund in Ephesians, it is being poured out for our peace and reconciliation with one another. Where, then, do the faithful of Christ encounter this poured out blood of our Lord? This continually poured out blood (and continually broken body of our Lord, see Luke 22: 19 – 20) is encountered in the Eucharist! When the Church, in faith, gathers together in eucharistic worship of our Lord, we are a living picture and reality of the peace won for us by the shedding of his blood.

I return to the epistle to the Ephesians:

But now in Christ Jesus you who once were far off have been brought near by the blood of Christ. For he is our peace, who has made us [Jew and Gentile] both one, and has broken down the dividing wall of hostility…that he might create in himself one new man in place of the two [Jew and Gentile], so making peace, and might reconcile us both to God in one body through the Cross, thereby bringing the hostility to an end (Eph 2: 13 – 16).

All and all things once in alienation, sin, death, and darkness are gathered together in peaceful relationship, holiness, life, and light in Christ Jesus as St. Paul informs us. But, he knew that this union in Christ must be manifested in the life of the Church: Jewish and Gentile believers must live in loving union — even with all the potential flare-ups of conflict and misunderstanding. Life in Christ means life in union in spite of differences. There is only one Church.

In this third decade of the twenty-first century, societal divisions exist, and they are profound. We as a nation are living on a societal powder keg with far too many people — of all political persuasions — are playing with matches. The political divisions are so great we may face, if a center is not found, a civil war. As a priest I have heard comments such as this: “I don’t even want to be around so-and-so because of his / her politics.” Unbelievable, as if politics can hold any truth or salvation!

Twenty-first century divisions are to be dissolved in the life of the Church — the Body of Christ — as his Body comes together in peace to receive his Body and Blood of the Eucharist. St. Paul teaches us again from his letter to the Colossians: “And let the peace of Christ rule in your hearts, to which [peace] also you were called in one body. And become thankful [kai eucharistoi ginesthe]” (Col 3: 15). Let me add — become eucharists!

In Christ and in Peace,
Fr. Irenaeus