There are only two kinds of guitar players in the world…Well actually there are many types of guitar players in the world, but allow me to break it down to what applies to me. There are only two types of guitar players in the world, those who can move between acoustics and electrics with ease, and those who cannot. While my two sons occupy the first position, I, sadly, occupy the latter. I’m an acoustic player. While I appreciate the wonderful tones that come from an electric guitar when played through effect pedals and amplifiers, I am far, far, more comfortable with an acoustic guitar. Part of that comfort comes from the fact that acoustic guitars were the first guitars I owned, and upon which I learned the instrument. Another aspect is that with an acoustic guitar no set up (and take down) of amp, cables, or pedals is part of the music making experience. You pick one up and play. One more admission: I have a relatively “heavy hand” and I find an acoustic far more accepting and forgiving of my touch. So, my three electrics generally languish in their cases and my amps collect dust.

In my explorations, I have tried various acoustic-electric hybrids such as the Taylor T5 and Godin’s Ultra-6 to name a few. Their necks and touch are far too electric in feel, and thus, never purchased. Then early in 2019 I learned about Godin’s new Multiac Steel hybrid. I tried one out at a local store comparing it with a Taylor T5. Hands down the Multiac Steel was the winner. Though heavier, it felt and played far more like an acoustic than an electric. Yet, there were many features that make it also an electric guitar. 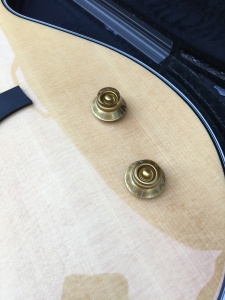 It is an attractive instrument having the appearance of a Les Paul. It is solidly built guitar.  It makes a statement of quality.  This Multiac has a solid spruce top, mahogany neck with a synthetic fretboard of Richlite (used on some Martin guitars as well), and a chambered wooden body. It has a 25.5 inch scale length and a nut width of 1.72 inches which together add to the acoustic feel I prefer. There are both acoustic LR Baggs pickups and a Seymour Duncan lipstick pickup (this single coil is located just below the fret board). There are two sets of controls and two outputs jacks that allow you to dial in a mix of both acoustic and electric qualities, acoustic only tone, or electric only tone. The control knobs on the body are the true captains of the tone. When you plug into the acoustic output you can blend the acoustic and single coil pickups: the volume knob adds in the single coil to taste while the tone knob dials in the single coils tone (neck to bridge tones). When the single coil output is accessed alone no acoustic blend can occur — it becomes purely electric in character. However — since it is a hybrid — you can plug into both outputs and play through both an acoustic and an electric amp.

The guitar without any amplification when played has the sound of a hollow body electric when such a guitar is not amplified. But, of course it needs to be amplified to demonstrate its true qualities. The Godin was first played through a Marshall AS50D acoustic amp through the acoustic output jack. Through this amp the Multiac sounded like any amplified acoustic guitar until you blend in the lipstick single coil with the volume control knob. Here, the tone is quite unique.

Next, I went for the pure electric aspect of the Godin. I plugged into a Blackstar HT Club 40 amplifier. The tone produced was truly that of a electric guitar whether played clean or on overdrive. A variety of tones were selected from the amp, and this guitar handled all of it quite steadily.

I truly have the best of both worlds — I now have an electric guitar that has the comfortable feel of an acoustic guitar. This Godin Multiac Steel is a “keeper” that will be played.