English author Richard Adams is best known for his worldwide best seller, Watership Down first published in 1972, and was subsequently made into an animated movie 1978, and animated television series in England, then recently butchered by Netflix-BBC two years ago. Adams was involved in a number of movements directed toward animal welfare, and was, for a time, director of England’s RSPCA. In Watership Down, Adams’ rabbit characters remark about humanity’s indifference, and even hostility to animals and the environment in general. Perhaps the most striking lament by Adams comes from Chapter 21, “For El-ahrairah to Cry.” Here, Holly (the Bard of the band of rabbits) states:

It [evil] comes from men…All other elil [enemies] do what they have to do and Frith [the rabbits’ god] moves them as he moves us. They live on the earth and they need food. Men will never rest till they’ve spoiled the earth and destroyed animals 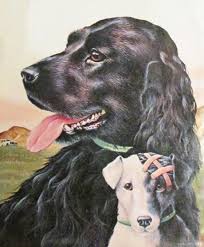 In his third novel, The Plague Dogs, he greatly expands his criticism of human cruelty, and puts forward a novel which speaks to animal welfare. Here, he writes in opposition to animal exploitation / experimentation aimed at cosmetic and industrial research, and experimentation done simply for the sake of the advancement of “scientific knowledge.” At times Adams comments are biting and sarcastic as he speaks his mind through the heroes of the novel, Rowf and Snitter (a large mongrel and a fox terrier, respectively), and as commentator. This tone is initially established in an observation he makes after the two dogs escape from an animal research lab in England’s Lake District. The quote comes from the final paragraph of the first chapter, “Friday the 15th October”:

A quick run past the rabbit’s execution shed, a turn round the kittens’ quicklime pit, a moment’s hesitation beyond the monkeys’ gas-chamber — and they were gone…Slowly the rain ceased, the grey rack blowing away and over Windermere as first light came creeping into the sky and the remaining inmates of Lawson Park awoke to another day in the care and service of humanity.

As I observe the state of the environment and of our fellow creatures, I have often asked, “Don’t we know enough? Don’t we have enough shopping malls, supermarkets, and expansive, new housing developments that rip apart habitats for birds and other creatures?” Adams echoes my questions as he writes of the villain of the novel — the primary research lead at Lawson Park, Dr. Boycott:

He was a qualified expert, initiative was expected of him, his subjects had no legal rights; and intellectual curiosity is, after all, a desire like any other. Besides, who in his senses could reasonably expect Dr. Boycott to ask himself, on behalf of the human race, not “How much knowledge can I discover?” but “How much knowledge am I justified in seeking?”

This question serves Adams throughout the book as we follow the adventures of Rowf and Snitter. Adams not only comments on this matter, but also the attitude of humans towards animals. He does not condemn all economic use of animals as do many contemporary, extreme animal welfare activists. He sees the interests of agriculture as valid — he does not advocate abstinence from meat, cheese, eggs, etc., He does not call such animal husbandry cruel. We additionally discover, as we move through the novel, that he does not condemn legitimate medical research. However, in the following quote (a dialogue between a Major Awdry and an enlisted man) we find this near-summary statement:

“You feel sorry for the dogs, I expect, Major, don’t you?” asked Travers, the H.Q. subaltern. “I know I do.”
“Frankly, yes,” said Awdry. “I dislike the whole business of experiments on animals, unless there’s some very good and altogether exceptional reason in a particular case. The thing that gets me is that it’s not possible for the animals to understand why they’re being called upon to suffer. They don’t suffer for their own good or benefit at all, and I often wonder how far it’s for anyone’s. They’re given no choice, and there’s no central authority responsible for deciding whether what’s done in this case or that is morally justifiable. These experimental animals are just sentient objects; they’re useful because they’re able to react; sometimes precisely because they’re able to feel fear and pain. And they’re used as if they were electric light bulbs or boots…but it just occurs to me that creatures living entirely in the immediate present, through their physical senses, may suffer more rather than less intensely than we do.”

As the book concludes, Rowf and Snitter are escaping chase and the threat of death due to a rumor that they carried with them the bacteria which causes Plague (Yersinia pestis). Before they are rescued by naturalists on a boat, they are swimming in the ocean and Snitter is near death. At this time he has a vision about the cruelty imposed by man upon the animals of the planet. The vision puts forward Adams’ conclusion on the matter:

His [Snitter’s] eyes were filmed with ice and, now that he knew that he was dead, he peered through it, without fear of falling, at what lay beneath him in the twilight. The world, he now perceived, was in fact a great, flat wheel with a myriad spokes of water, trees and grass, forever turning and turning beneath the sun and moon. At each spoke was an animal — all the animals and birds he had ever known — horses, dogs, chaffinches, mice, hedgehogs, rabbits, cows, sheep, rooks and many more which he did not recognize — a huge, striped cat, and a monstrous fish spurting water in a fountain to the sky. At the centre, on the axle itself, stood a man, who ceaselessly lashed and lashed the creatures with a whip to make them drive the wheel round. Some shrieked aloud as they bled and struggled, others silently toppled and were trodden down beneath their comrades’ stumbling feet. And yet, as he himself could see, the man had misconceived his task, for in fact the wheel turned of itself and all he needed to do was to keep it balanced upon its delicate axle by adjusting, as might be necessary, the numbers of animals upon this side and that. The great fish poured blood as the man pierced it with a flying spear which exploded within its body. The striped cat melted, diminishing slowly to the size of mouse; and a great, grey beast with a long trunk cried piteously as the man tore its white tusks out of its face. Still on towards the wheel he circled, and between him and the wheel Mr. Ephraim [a character who died by means of an accident] called him silently to fellowship with the dead.

Blunt, scathing, but precise: Such cruelty comes from our fallen human nature as it is governed by ignorance and greed.

However, Adams does not see all of humanity in such a light. He clearly acknowledges that the majority of humanity can and do act with kindness. He uses the dogs’ debate about humans to make this contrast. Snitter had a master. Snitter, after his escape, longs for the two dogs to find another kind, loving master. Snitter contrasts masters to the cold, clinical cruelty of “whitecoats” — the researchers who conduct their experiments on them. Hence, we are to be “masters” and not “whitecoats.” We who are Christians are to see ourselves as priests, by virtue of baptism and our relationship with God by faith, created to be vice-regents on earth. As such priests we are to bear God with peace and love to all creatures and creation. Then, in turn, bear all creatures and creation to God via our prayers. As vice-regents and priests we are to cultivate, nurture, and serve the entirety of creation — we are never to exploit God’s works. We are to bring healing and wholeness to humanity and our fellow creatures, and to the environment in which we all live.

Richard Adams was a man of such Christian faith. May we heed his words, and learn from the Christian Scriptures, and our ever deepening understanding of our fellow creatures as common companions, neighbors, and even friends as we move together upon this spherical home of ours.

Please read other posts on a Christian perspective of animal welfare, etc.:

The Sparrow and the Swallow in the Temple; “Save the Babies and the Whales” or being Pro Pan-Life; “Big Leaf” Gets a Blessing