Recapitulation in the “Here and Now”

Posted: November 29, 2017 | Author: Fr. Irenaeus | Filed under: The Eucharist and Living the Eucharist | Tags: All things are gathered together in Christ: Recapitulation, and unity in the parish is a manifestation of Reconciliation, Eph 1: 9 - 10 defines Recapitulation, Eph 4: 1 - 6 demand for peace and unity, Jesus' High Priestly Prayer and the demand for unity an love, love, Peace, Recapitulation manifested in Ephesus |Leave a comment 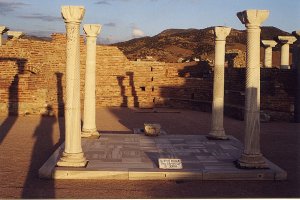 Within the salvific model of Christus Victor there is the wonderful aspect of recapitulation. I have written several postings about Recapitulation and refer to it frequently. We have a New Testament declaration of this subject. It is found in St. Paul’s epistle to the Ephesians:

Having declared to us the mystery of his will, according to his good pleasure which he intended for him [Christ], for the purpose of the fulness of time: to gather together all things in Christ, those things in the heavens, and those things on earth (Eph 1: 9 – 10).

St. Paul is declaring that all that was lost and scattered into the exile of sin, death, darkness, and alienation by Adam’s disobedience and capitulation has been gathered together into relationship, light, life, and holiness in Christ. All that is of creation — all that is imaginable — from the smallest subatomic particle to the most bizarre, remote and distant extraterrestrial thing is gathered together, and contained within, the God-man, Jesus Christ: this is Recapitulation. St. Paul writes again of Recapitulation in his epistle to the Colossians:

This gathering together of all things in Christ by means of his Incarnation is not random. It is orderly. It has also taken place by Christ’s shedding of blood. There is now relational union and peace between God, humanity, and creation.

The salvation of Reconciliation given by Christ can seem very grand and idealistic — quite far removed from the chaos and conflict seen all around us every day and in every place. Be quite certain that St. Paul takes this grand theme and tells the Ephesians to make it a reality in the life of the city’s Church. For, in his day and in his mind as a Jew now faithful to Christ, there was no greater societal and cultural division than that of Jew and Gentile. All the Apostles apparently had to deal with this, but none took it as seriously as St. Paul. This division and conflict was encountered by him in Rome, Galatia, and in Ephesus. Jew and Gentile struggled mightily to live in the harmony and peace demanded by their faith in Christ as they gathered together in their worship which moved to its climax in the Eucharist, and also as they lived in the greater community of Ephesus. St. Paul addresses this need for unity throughout the letter to the Ephesians, but addresses it pointedly in the second chapter:

Therefore remember that at one time you Gentiles in the flesh, called the uncircumcision by what is called the circumcision, which is made in the flesh by hands — remember that you were at that time separated from Christ, alienated from the commonwealth of Israel, and strangers to the covenants of promise, having no hope and without God in the world. But now in Christ Jesus you who once were far off have been brought near in the blood of Christ. For he is our peace, who made the both of us one, destroying the wall of division, the enmity, by abolishing in his flesh the law of commandments and ordinances, that he might create in himself one new man in the place of two — so making peace — and might reconcile both of us to God in one body through the cross, thereby bringing the hostility to an end. And he came and preached peace to you who were far off and peace to the who were near; for through him we both have access in one Spirit to the Father. So then you are no longer strangers and sojourners, but you are fellow citizens with the saints and members of the household of God, built upon the foundation of the apostles and prophets, Christ Jesus himself being the cornerstone, in whom the whole structure is joined together and grows into a holy temple in the Lord; in whom you also are built into it for a dwelling place of God in the Spirit (Eph 2: 11 – 22).

Simply put, this basic first century ethnic / cultural division is destroyed by the Cross of Christ. There is to be peace and unity in the Church founded by Christ. In the fourth chapter of Ephesians the exhortation for peace and unity is addressed once more:

Therefore, I, a prisoner in the Lord, urge you walk worthily of the calling to which you were called, with all humility and gentleness, with patience, enduring one another in love, working hard to keep the unity of the Spirit by the bond of peace. There is one body and one Spirit, just as also you were called to one hope of your calling. There is one Lord, one faith, one baptism, one God and Father of all who is over all things, through all things, and in all things (Eph 4: 1 – 6)

In spite of opposing personalities, politics, ethnicity, etc., we endure each other that we might pray for each other and come to true appreciation and love for one another. This unity and peace are demanded in light of faith and the triune nature of the Trinity. It is not only St. Paul who makes such demands. St. John precedes St. Paul in his gospel as he reports the intention of Christ. We read these words as our Lord concludes his High Priestly Prayer: 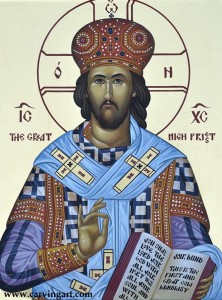 The Church continues to address and express our Lord’s desire for peace and unity as the Church moves through its worship in the Divine Liturgy. In the liturgical expression of “The Peace” there is this dialogue between the clergy and the choir/people:

Priest: Peace be unto all.
Choir: And to your spirit.
Deacon: Let us love one another, that with one mind we may confess:
Choir: Father, Son, and Holy Spirit! The Trinity, one in essence, and undivided!

At this liturgical point there is a physical embracing of one another with the verbal exchange of “Christ is in our midst!” To which comes the reply, “He is and ever shall be!”

This peace and unity was not just for first century Christians. It is to continue and be manifested in the Church by twenty-first century Christians. Pick your cultural or social difference, or division, of choice — it too is to be submitted to Christ — that we may be one. Thus we manifest Christ’s salvation given to the entirety of humanity and creation now existing in peace, love, and unity in him where he is seated at the right hand of God (Col 3: 1).