← Wateship Down Characters: General Woundwort
Watership Down — The Warren of the Snares →

Posted: August 13, 2016 | Author: Fr. Irenaeus | Filed under: Etcetera | Tags: Exegesis of John 4: 4, Interpretation of the Wedding at Can, John 2: 1 - 11, Mary as Intercessor, Mary as Intercessor in John 2: 4, Mary as Queen Mother, Mary as Queen Mother to Jesus, Mary's act of intercession in the Wedding at Cana, Mary's first act of intercession in John 2: 4 |Leave a comment

The title Queen Mother refers to the mother of the king, or the reigning monarch. In the Ancient Near East (ANE) the king would have multiple wives, as did David, and as did Solomon. To prevent favoritism, and intrigue, the ANE kings’ mothers were the queens — the Queen Mothers. Typically, the Queen Mother was an intermediary between subjects and the monarch.

We have a biblical example found in 3 Kingdoms (1 Kings) chapter two. King David has died and has named Solomon king. He has been anointed and enthroned to the surprise of David’s eldest son, Adonijah. With Solomon as king, his mother, Bathsheba, is now Queen Mother. In the following pericope, we see Bathsheba’s role and actions as the new Queen Mother:

Now Adonijah the son of Haggith came to Bathsheba the mother of Solomon and bowed down before her… “Now I ask one petition of you. Do not turn away your face.” Bathsheba said to him, “Speak.” Then he said to her, “Speak to King Solomon, for he will not turn his face from you; and let him give me Abishag the Shunammite for a wife.” So Bathsheba said, “Very well, I will speak for you to the king (3 Kingdoms 2: 13, 16 — 18).

The narrative and description of the role of Queen Mother and her relationship with her son, the king, continues.

So Bathsheba went to King Solomon to speak to him for Adonijah. The king rose up to meet her and kissed her tenderly. He then sat down on his throne, and a throne was placed for the king’s mother; and she was seated at his right hand. Then she said to him, “I desire one small petition of you. Do not turn away your face.” The king said to her, “Ask it, mother, for I will not refuse you” (3 Kingdoms 2: 19 — 20). 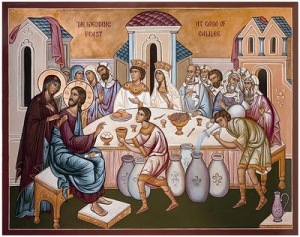 And on the third day a wedding occurred in Cana of Galilee, the mother of Jesus was there. Now, Jesus and his disciples were invited to the wedding. And after the wine ran out, the mother of Jesus says to him, “They have no wine.” And Jesus say to her, “What is this between you and me, woman? My hour has not yet come.” Then his mother says to the servants, “Whatever he might say to you, do it” (John 2: 1 — 5).

There is a verse in the text that is quite intriguing: “What is this between you and me, woman? My hour has not yet come.” This verse has been taken by far too many commentators I have read to be some sort of put-down. I disagree. This verse is a formulaic expression and can be broken down to three parts, which has this construction.

The idiomatic, verbal formula is followed by the outcome intended by the request asked, or implied. This identical formula is also found in the synoptic gospel accounts of the Healing of the Gadarene Demoniac(s). St. Matthew’s version presents this formula in the dialogue between the two demon possessed men and Jesus (Mt 5: 29).

The formula also has this detail. The questioner(s) has an inferior position to the one addressed. In Matthew’s text, this, of course, is to be expected. Jesus is, of course, the demons’ Creator and Lord. Their request is granted by their casting out and entrance into a herd of swine. The interaction between Mary and Jesus is far more interesting. Here, Jesus assumes the inferior position in deference to his mother. Hence, she has the superior position in the dialogue! Why? This is Mary’s first act as Queen Mother! As Solomon — who in reality had the greater position — gave honor to Bathsheba’s office, so Christ gives proper honor to his mother’s office. Hence, the dialogue between Jesus and Mary at the wedding is not a put-down. His objection arises because he has not yet taken his throne, and Mary cannot yet be seated at his right hand. Rather, Jesus shows proper honor to his mother. She, after all, is Queen Mother!

The Orthodox Church has always acknowledged Mary as Queen Mother and intercessor. In iconography, the Deisis icon depicts Mary standing at Jesus’ right hand and St. John the Baptist at his left hand. In the rite of the Proskomede (the preparation of the bread and wine which will become Christ’s Body and Blood), a triangular piece of bread is cut out which depicts Mary. This is said by the priest at its cutting: “In honor and memory of our most blessed Lady Theotokos and Ever-virgin Mary. Through her prayers, O Lord, accept this sacrifice upon thy heavenly altar.” This particle is then placed by the Lamb (the large, cubic piece of bread which becomes Christ’s Body): “The Queen stood on Thy right side, arrayed in golden robes all glorious” ( reference to Psalm 45, LXX 44).

I acknowledge that the above interpretation of John 2: 4 will be questioned by many, but it stands. In conclusion, in honor of Mary — the Queen Mother — I present this hymn:

Steadfast Protectress of Christians, constant Advocate before the Creator, do not despise the entreating cries of us sinners, but in your goodness come speedily to help us who call on you in faith.  Hasten to hear our petition and to intercede for us, O Theotokos, for you always protect those who honor you.

In Christ and in honor of the Feast of the Dormition,
Fr. Irenaeus